Amber Duettmann and Valentina Harrendorf are the founders of SI BEAU (inspired by the thoughts of Simone de Beauvoir), the online-based fashion label developed to combine feminine, timeless designs in a workwear wardrobe. A few questions about the courage to found, the biggest challenges, and the fortune to be able to do your own thing 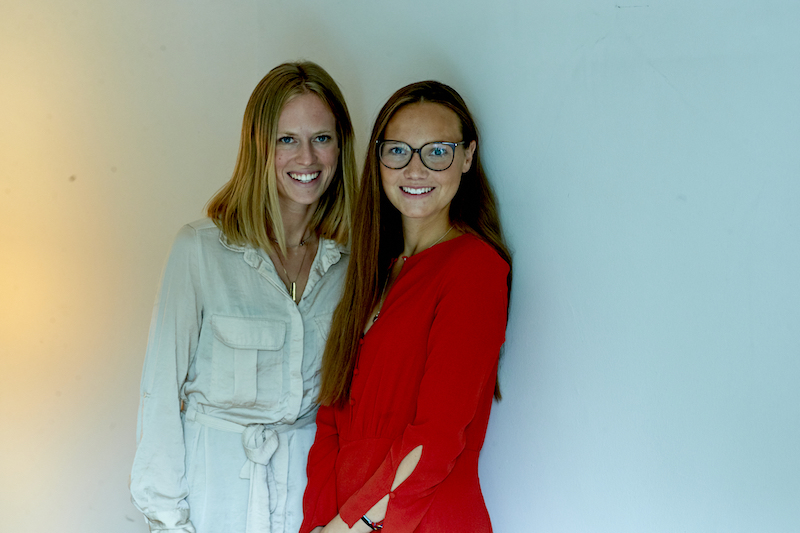 How we came up with the idea to found together:

Amber: I’ve worked in strategy consulting for the last few years, most recently at Bain & Company in Munich. I noticed that it's an unnecessary hussle for women to get really good business attire; a blazer that is comfortable, well cut, of high quality, and still doesn't cost 500 euros. And a lot of my colleagues had the same problem. At a focus group event, I then re-met Valentina – we’ve known each other since elementary school. At that time Valentina was about to start her own business as a designer, so we thought we would actually be the perfect match for this venture. We have an ideal set-up because we complement each other and cover both areas of expertise – the economic and the creative.

The special thing about SI BEAU:

Valentina: We’ve developed a workwear wardrobe that combines feminine, timeless designs with a focus on functionality and comfort. We want to play our part in slow fashion: long-lasting clothing made of high-quality, more sustainable materials such as Tencel. We’ve had a thorough on-site look at all the production facilities for the clothing and are now sampling with factories in Europe. We developed a desk-to-dinner formula in our first collection. This means that you can not only put your clothes on in the office, but also for dinner afterwards. We wanted to get away from those bad pantsuits that look like they were made for men just with a narrower waist.

What the name stands for:

Amber: With SI BEAU we want women to be able to feel feminine and powerful with as little effort as possible so they can focus on things other than the search for clothes. The brand stands for the fact that strength and femininity are not mutually exclusive, but instead complement each other without any agitation. That's not a new idea, but should be a given. For us, this is embodied by Simone de Beauvoir, one of the icons of modern feminism. We want to proliferate her ideas, and so our name does not only mean "so beautiful", but is inspired by Simone: SImone de BEAUvoir became SI BEAU.

What distinguishes us from other fashion brands:

Amber: We aren’t the next trend-oriented fashion label. We have a completely different approach than, for example, fast fashion retailers, who bring out a collection every two weeks. Our fashion has a high utility value – we want to make really beautiful basics and not be the summer romance but rather the life companion. This concept of longevity also has an impact on profitability. If it's not about bringing new creations onto the market every two weeks, it will impact your necessity for write-offs. We also rely on the direct-to-consumer model for sales. We expect to primarily sell online directly to the customer. We want to explain this price policy transparently on our website and show our customers what they are paying for. This direct customer contact also has the advantage that we can analyze data and learn from it.

The last step towards quitting the day job:

Valentina: It wasn't such a big step for me. When working creatively, I find it hard to work full-time anyway. You're often constrained. And that's why it was clear to me that I would take this step at some point. And then also with Amber!

Amber: I wasn't used to holding the reins- and that's exactly what I missed. I am actually also a creative person. Nevertheless, I found the decision harder to make. We talked a lot and openly about it – also about fears and doubts – and then at some point said to ourselves, “Okay, let’s do this.” I knew together with Valentina that this is an once-in-a-lifetime opportunity.

Valentina: The plan was to fund for three months and then start. That didn't work out with the three months, but we had already invested so much time that it was clear we had to continue.

Valentina: You discuss a lot, you do, but that's not an argument. I think we sometimes have different ways of thinking. Creative and strategic work is different, so sometimes you have to understand each other's work. But I don't think that's an obstacle, it's even beneficial.

Amber: There was a situation a couple of weeks ago which was a small milestone. To be honest, I was a bit unsettled before that. It was about how we imagine the collection in detail, and there we noticed that we had made many compromises. And that means that things don't get better, they get worse because the hard-edge approach is gone. You always say you have to be prepared to compromise, but I think it's much more important to make sure that everyone has the freedom to realize their full potential in this project. Otherwise it blurs too much.

Amber: Constantly dealing with the fact that you are lagging behind schedules. That little things that you didn’t anticipate and can’t control pop everywhere. Especially when looking for the right suppliers, you need patience and cannot easily shorten the process. You have to remain persistent.

How we motivate ourselves:

Valentina: Talking to other people about the project. The fact that so many people think it's great and are so for it is an enormous incentive. After these conversations, I always think that I have to immediately push on with it.

Amber: It makes me totally happy to see how it’s all developing. We just moved into our first office! That's a big step. The fact that you have the responsibility and the decision-making power is a huge motivator for me.

Valentina: Push towards launch in May.

Our tip for other founders:

Amber: Take your ambitions seriously. And to ask yourself, “How much do I want this?” and “Am I willing to give up some stability for it?” If you answer “yes”, you should do it. It was extremely helpful for me to see the whole thing as an experiment and to say to myself, “Failure would also be okay.” And my most important tip: don't found it alone. There are 1000 moments in which I am happy that we are doing this together.